This 8 1/2-acre body of water that welcomes visitors to the Bellagio features more than 1,200 water cannons, including 16 “extreme shooters” capable of sending water streams up to 500 feet in the air, as well as a mood-setting fog system and nearly 5,000 lights to illuminate the
display seven nights a week. Each fountain is programmed and maintained by a team of 30 specialists, and in its 14 years of operation, the Fountains of Bellagio have never missed a show due to a technical issue. 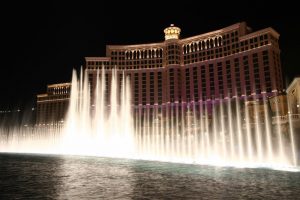 A team of Crest Audio networkable power amplifiers provide rock-solid, high-quality sound reinforcement for the Fountains of Bellagio. The system includes 79 Crest Audio CKi™ 800V amps, 21 CKi 1600V amps, two CKi 800S amps, and one CKi 1600S amp, all of which are outfitted with Nx Ethernet cards for networking with the Peavey® MediaMatrix® NION® n6 processor. With the ability to deliver audio via CobraNet and control on one CAT-5 cable, the CKi series gives contractors and system designers an ultra-scalable system capable of economically powering anything from the smallest building to the largest theme park or stadium.

“Crest Audio power amplifiers have a reputation for reliability in the field, and that has proven true here at the Bellagio,” said Art Martinez, Sales Manager at Kelly Technologies. “Crest Audio’s CKi networkable amplifiers allow us to manage and control hundreds of loudspeakers
through each individual amplifier by interfacing with the MediaMatrix NION.”